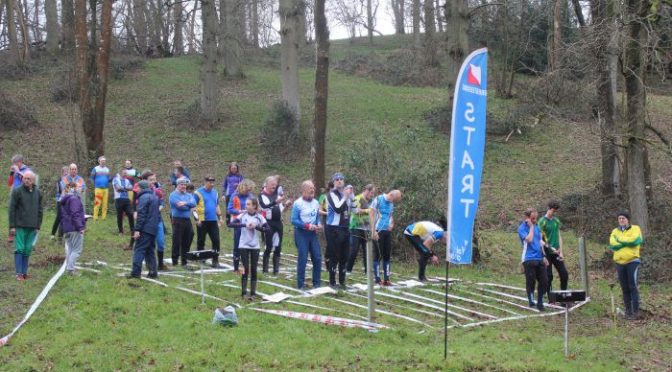 (Thanks to Mark Howell for use of the pictures. In the top picture, in SLOW colours waiting to start, is Keith Davies. David Dawson, who controlled our recent event at Holmwood Common, is the start official.)

On Sunday 11th SLOW were second in the Regional CompassSport Cup Match. So we qualified for the Autumn Final. We have missed out on the final the last two years but very much enjoyed the trip in 2015, so we can now look forward to the West Midlands on the weekend of October 21st.

The Cup racing was on the Balcombe Estate, an area south of London of mixed woodland and fields, with many steep slopes. The event was hosted by Dartford (DFOK), with additional help from Southdowns. The ground was heavy and quite wet, so there was a lot of mud, although the weather on the day was lovely.

A club scores its best 25 “counting” runners – they must be spread across the age/sex classes – but there is no limit to the number of runners in a team. (Please see the end of this post if you want more details.)

We fielded a team of 49. Our counting 25 were 14 men and 11 women.  A big difference this year for SLOW was the presence of 4 juniors in the counting 25 – thankyou, and very well done to them.

There were seven clubs at the tie. Two were to qualify for the final. Three of the seven did not field a full team, which has a big impact. (Happy Herts had three runners in the England team running in the Netherlands.) The winners were Southdowns (SO) led by 3 scores of the maximum 100:

We were 22 points behind, and were reasonably comfortably ahead of 3rd placed Southern Navigators and 4th placed Berkshire. For various reasons we are optimistic we will overhaul SO come the final, although expect the above Southdowns runners to again do well!

All four full teams scored at least 10 women in the 25.

Pictured: Rebecca and Fiona, counting on the Open Women’s course, Karen and Di, counting in veteran classes. Di won her course, scoring the maximum100. (The other maximum was from Karen’s husband Andy.) More Details of the Scoring

This is orienteering: it is fairly complex. Even this summary is not quite right. External link to the full rules.

There are eleven different races, categorised by sex and age. A runner gains points based on their position in their race, first gets 100, second gets 99 (or 98 in junior races), etc. A club’s best 25 individual scores totalled make the club score. At most 4 runners per race can be counted (2 in each junior one) – so it is best 25 from 36 maximum, although there is no limit to the total numbers in a team, the more the better.

The different races reflect the demographics of the whole UK sport: they have changed over the years, reducing the relative significance of younger adults and increasing that of older ones. But I can’t tell you why a contest between two juniors is twice as important as one between two seniors, although it must be to do with the tighter cap on counters.

The other two women’s are:

The other four men’s are:

Women can run as men. And runners can run up, so clubs with extra older adults can spread some to the younger adult races, or those with extra juniors can move some to senior races. The races are matched with similar or easier courses compared to regular National and Regional events.