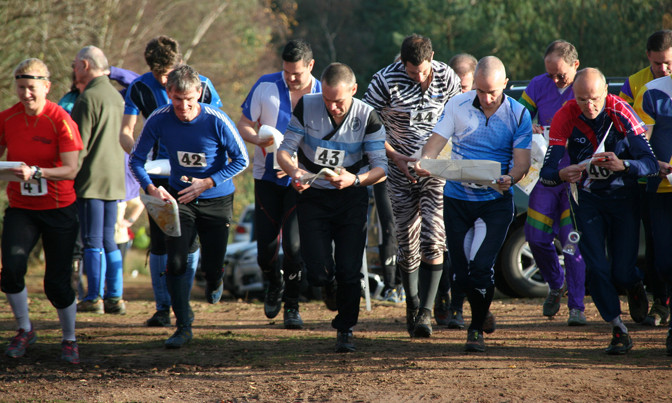 The OK Nuts Trophy is SLOW’s annual premier orienteering race, usually held in late November or early December. The event was first held in 1977 at the Devil’s Punchbowl, and has been held nearly every year since.

Up to 2021, the race has been held most often on Hankley Common (11 times). The joint second most popular location has been Esher Commons (8 times) and Winterfold & Pitch Hill (8 times).

There have been some illustrious winners of the OK Nuts trophies in the past, including orienteers who went on to become British Champions and represent Great Britain, such as Chris Hirst, the first winner in 1977, and Graham Gristwood, the winner in 2001, who went on to win a relay Gold medal for Great Britain at the World Orienteering Championships in 2008.

There were a few years when the trophies were not awarded as the race was not held for various reasons. In 2000 the first attempt to hold the race was washed out due to heavy rain and the second attempt was cancelled due to an outbreak of Foot and Mouth disease. The 1997 race was postponed to early 1998, hence two entries for that year. There was no event in 2020 due to the Covid-19 pandemic.

The OK Nuts Trophy has on many occasions tried to do something other than a “bog standard” orienteering race. In 1996 at Hankley Common, the mens/womens premier courses were both set using maps where all the paths had been taken off. Most competitors enjoyed the challenge, some even saying that navigation was easier without the distraction of the black lines. We see used sometimes since in various scenarios – for example (optional) classes of the OO Cup in France in 2020.

Innovations in recent years include mass start loop races in 2003 and 2004, a “Micr-O” section in the middle of the mens/womens premier courses in 2005, and the first middle distance regional event to be held in the south-east in 2008. (Further information on recent events can be found below.)

The OK Nuts Trophy is in memory of Mike Wells-Cole, a former British Champion and a member of Nutfielders OK (now merged with SLOW), who died in 1976. The trophy is awarded to the winner of the senior men’s course.

The OK Nuts Women’s Trophy is awarded to the winner of the senior women’s course. In 2005, the trophy was named in honour of Heather Monro, a long-standing SLOW member who won a bronze medal at the 2005 World Championships at the end of an illustrious orienteering career. Heather had won the trophy herself for the first time the previous year.

The OK Nuts Junior Trophy is in memory of Margaret Loveless, another long-standing member of SLOW, who died in 1993. This is awarded to the best overall junior, which is a subjective decision based on the best performance by an M/W18 or younger. The trophy is a beautiful model of different types of gate made by club member Mike Murray.

In 2003 the format of the event changed with a loop race (a one-person relay with a mass start) that produced a thrilling finish with the first three runners all coming in within seconds of each other. This was won by Ed Catmur, who retained the Trophy he first won the previous year. He was the first SLOW member to win the men’s OK Nuts Trophy. The women’s trophy was won by Katerina Heczkova of CROC.

In 2004, the loop race format was retained, and the OK Nuts Trophy was won by British Squad member Matt Crane (Walton Chasers). The Women’s trophy was won by British Squad and SLOW member Heather Monro. The British O squad were competing in the South-East in preparation for a British round of the World Cup races in May 2005. Heather went on to come 6th in the sprint World Cup race in Battersea Park and then win a bronze medal in the sprint at the World Championship in Japan (becoming only the third ever British world champs individual medalist). Matt won silver at the final World Cup race in Italy. Graham Gristwood, our champion in 2001 and Junior Champion in 2002, also represented Great Britain at the World Championship in Japan in 2005.

The 2005 race, held on Esher Commons, included Micr-O for the first time at a British event for M21L and W21L classes. This contained a section of the course with uncoded controls and dummy controls in order to reward accurate navigation on complex terrain using a special map with contours at 2.5 metres. The men’s and women’s trophies were won by Ian Nixon (Airienteers) and Sarah Rollins (British Army) respectively.

The 2006 event returned to the standard Regional Event format, and was held on Winterfold & Pitch Hill, on the same map as the World Cup Classic race held on the area the year before.

In 2007, the 30th anniversary of the OK Nuts Trophy, the event returned to the venue of the first race at the Devil’s Punchbowl.

In 2008, the event was a Middle Distance Regional Event for the first time, and was held on a brand new area to orienteering (the first OK Nuts Trophy to offer a new area for many many years) – Glovers Wood, near Gatwick Airport.

In 2009 the race was held on a new area for the competition – Bramshott Common – in conjunction with the Army Inter-Corps Championships. This was the first time the race contained a full range of colour coded courses, rather than age class courses, in line with British Orienteering guidelines.

In 2010 (at Longmoor) and 2011 (at Hankley Common) the event adopted the Blood Race format for the longest courses, similar to the loop race format of the 2003 and 2004 events, with the two longest courses being mass start races of 15km and 10km.

In 2012 the event returned to the standard colour-coded format. This event was held at Esher Commons, in conjunction with the Southern Night Championships held at the same venue the night before.

In 2018 South London Orienteers teamed up with Southern Navigators (SN) to hold the event on a newly combined map of Hindhead Commons and the Devil’s Punchbowl.