SLOW club members, including Chris Robinson and Alan Leakey, helped organise a special orienteering challenge for well-known media personality Chris Evans, as part of his Radio 2 Breakfast Show Sporting Challenges series, earlier this week in Battersea Park, South West London. Chris was first coached by British Army orienteers, and British Orienteering squad member Julia Blomquist, before taking part in, and winning, a short orienteering race through the park, using a standard ISSOM orienteering sprint map and electronic timing. Chris was encouraged on by Anneka Rice, who had brought a particularly spectacular example of 1980s style orienteering kit for his competitor to race in. The BBC video of the event can be watched above. 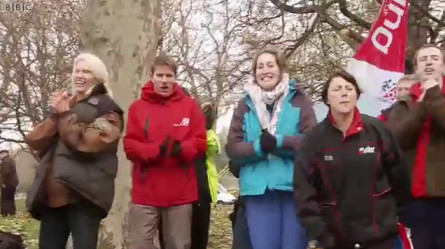 Up bright and early (well, one out of two ain’t bad) to drive over to Chris Fry’s house to pick up assorted banners from the SLOW equipment stocks before heading off to Battersea Park to meet up with Guy [Hiddleston] and Charlie [MacMillan] plus Julia Blomquist from the British Squad. Glad to see that the snow has all gone but not much to do for the first 2 hours as we stand around on a hill in the NE corner of the park guarding the Start and Finish of the challenge course. To keep the cold at bay we huddle in a tent and take turns jogging around the course to make sure nothing has gone missing. Meanwhile the Radio 2 contingent have been getting coaching from Dave Rollins of BAOC in the warmth of the athletics track pavilion. Finally, and nearly on schedule, Chris Evans and Johnny Saunders plus Anneka Rice turn up on our hill with the film crew and BAOC contingent in tow. Chris Evans is struggling manfully with a cold and sore throat and well wrapped up, definitely in charge but not looking very athletic at the moment. I worry about how this is going to go but everyone is in surprisingly good spirits despite the bitterly cold conditions. Most of the briefing had already been done inside so pretty quickly it is time to shoot Anneka’s Challenge. 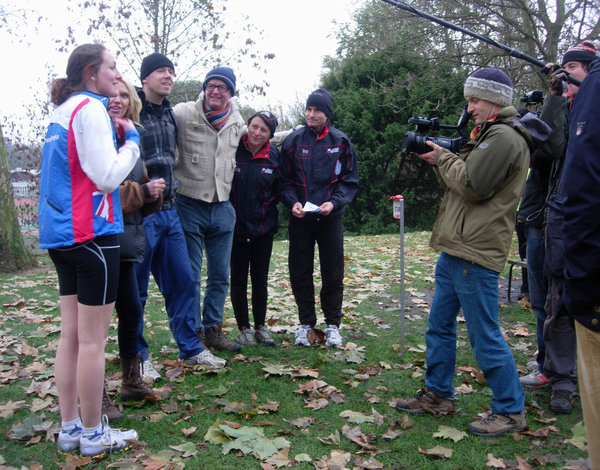 First of all Julia, under unofficial instructions not to try too hard, goes off to set a target time. Obviously she has been told not to fall into the ‘they wear pyjamas’ trap when it comes to kit but instead of slinkies (definitely my choice in these temparatures) she opts to wear shorts – Brrrrr! A relaxed Julia runs the course in 3m58s and then it’s time for the stars. First the crew film Chris starting, then immediately cut whilst a mini camera is strapped to his head. Then it’s back to restart for real, definitely no stopping for the camera to get nice shots now – suddenly this is a competition with both men definitely wanting to win. Despite thick jumper, scarf and boots Chris runs/jogs all of the course that I can see and in a surprisingly good time – 5m28s for 6 controls in just under 1km. Obviously piloting a helicopter has honed his map reading skills.

Then it’s Johnny’s turn, looking a bit more competitive in trainers and lurid pink tights. We go through the same start/restart routine and then he is off. Definitely more visible effort here but maybe no faster and he comes running up the hill in a time of… 5m48s, 20 seconds slower than Chris, who is duly declared the winner amidst much mugging for the cameras. 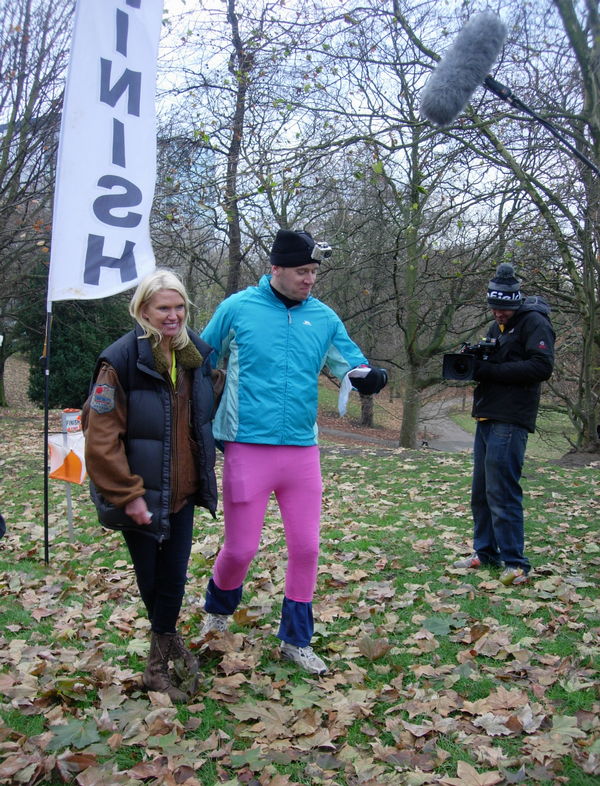 Battersea Park was mapped by SLOW and was used as the Sprint Final in the World Orienteering Cup in 2005, as well as being one of the club’s Park Race events this summer. 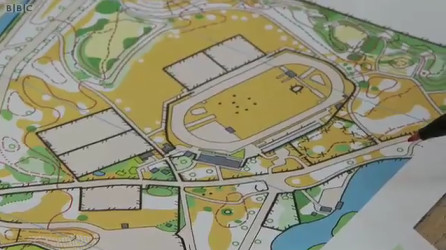 Photographs from Alan and the BBC video.