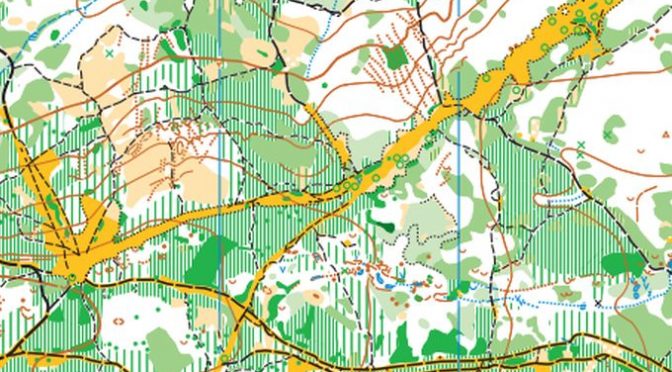 This competition required entrants to plan Orange and Blue courses on Charlie Turners’s fine map of Holmwood Common, which featured much ‘green stripe’ to add to the challenge! We had 10 entries, although none in the Junior category, which were judged anonymously by Alan Leakey and Matthias Mahr.

After much deliberation we decided to award joint 1st place to Jim Mallinson and Steve Clelland, with 3rd place going to Barbara Griessner.

Both winners produced excellent Blue courses taking full advantage of the nicest bits of Holmwood, while at the same time offering much variation and as a bonus, a really good long route choice. As expected, providing Orange courses at the appropriate technical difficulty proved much harder for everyone! Congratulations to our winners, who will receive prizes of SLOW kit, and thank you to all the entrants for giving it a go.

Both Jim and Steve produced excellent blue courses with good variety and a good route choice leg. We felt that Steve’s blue course was marginally the better one, particularly around the start and finish areas but also because it took in more of the area and had a nicer ‘shape’. On the other hand, Steve’s orange course was a little too hard in the second half especially in an area as detailed as Holmwood, while Jim’s course was of more appropriate difficulty. Hence, we felt the fairest thing to do was to award joint 1st place.

Orange. A good course, with many controls just off paths to increase the challenge, although #9 was bordering on the too hard. In common with most entries it lacked any significant route choice legs, which is something that the Orange course should aim to introduce. However, the route from the last control to the Finish is too complex at this level; it would be better with a last control on the path to the north of the Finish.

Blue. A varied course which good use of the limited ‘white’ terrain in the forest. A big range in leg lengths and types which therefore require a variety of skills from the competitor. A really long good route choice leg. However, the route from the last control to the Finish doesn’t meet BOF guidelines and opens up the probability of competitors approaching the last control from several directions and mixing with people heading to the Start; it would be better with a last control on the path to the north of the Finish. Also, the ‘shape’ of the course is a little squished due to the course sticking to a relatively small (but very runnable) part of the forest.

Orange. A nicely shaped course, although #4 represents a dogleg. Many controls just off of paths to increase the challenge, but the second half of the course (from #6) is probably too hard for an Orange course on an area as complex as Holmwood. While Steve managed to introduce some route choice, as is requested for Orange, the leg from 6 to 7 requires very fine navigation, and the approach to #10 requires a bearing with no catching feature behind.

Blue. A really good and varied course which makes the most of the limited ‘white’ terrain in the forest and requires a variety of skills from the competitor. #2 is a good, really long leg that adds to that variety. We really couldn’t find anything to improve on this course.