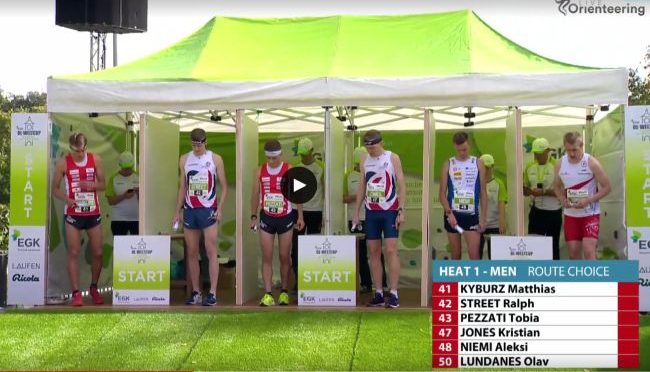 Posted on 8 December 2019 By Paul Street

A relatively new format for international orienteering is the Knockout Sprint. A knockout sprint runs for a day, through four rounds, with runners qualifying or not for the next round at each of the first three. It culminates in a six runner final. Rounds apart from the first are mass start, first-to-the-finish races.

There have been two at World Cup meetings so far, one last year in the Czech Republic, and one in September this year in Switzerland.

Of course a reason for it is the potential to engage an audience, to bring top orienteers close to spectators and to promote the sport.

There was also a need for a third format (alongside individual and the mixed relay) for the Sprint World Championships, now that Forest and Sprint alternate rather than being combined. The first World Champs Knockout Sprint will be 9th July 2020 in Fredericia, Denmark. (There is an accompanying six-day orienteering festival for spectators who want to run as well as watch.) The second will be in Scotland in 2022.

The TV from 2019 World Cup Round 3 which was a couple of months ago in Laufen, Switzerland is now available free.

For the GB team a highlight was the Knockout Sprint Men’s Semi-Final 1 with Forth Valley Orienteers’ Kris Jones (*) and SLOW member Ralph Street. It is one of three “semi-finals”. There are six runners who have come through the two morning rounds, and the first two at the finish will go through to the final.

With commentary from Katherine Bett and Jonas Merz, it’s at 44 mins and it lasts ten minutes: https://orienteering.sport/event/orienteering-world-cup-round-3/knock-out-sprint/web-tv/