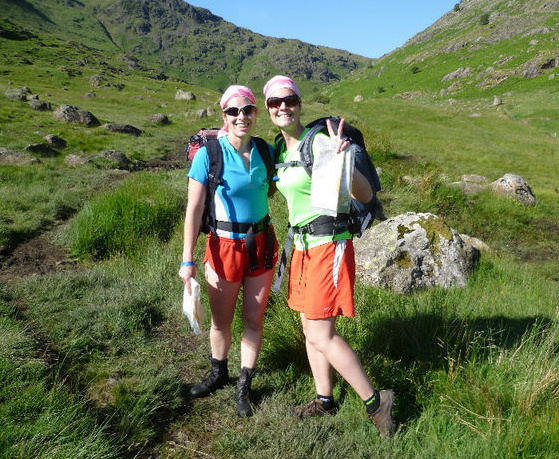 SLOW members were out in force at the Saunders Lakeland Mountain Marathon, a two-day event which took place last weekend at Wansfell.

Carys and I weren’t meant to be being competitive, I’m feeling seriously unfit after a season of injury and so haven’t really been able to train, but we had Vicky and Libby starting 16 minutes behind us so were conscious of getting caught up and didn’t really want that to happen. The start was straight up a hill. Luckily us we were starting late there was quite a path but it was still a pretty tough climb (particularly for me, who seems to be really bad at hiking uphill at the moment). Then to a path and a bit of a run before hitting the control on a line quite nicely. Next a nice flattish leg down to a tarn, then a massive climb. Bit of a route choice – straight line and up the steps or straight up the rock face (as some teams took to choosing. – my general policy, if people are climbing with ropes, I don’t want to be scrambling). So we took the steps – Libbs and Vicky actually went round, a route I didn’t see but actually seemed to work pretty well and in hindsight might have done the same. Took really nice lines to the next 2 controls and were a bit self-congratulatory! Then were a little bit off going up to a tarn and made a mistake coming down. So used to going straight, and getting tired, we failed to notice that other teams were going straight down to the path and probably annoyingly lost a few minutes. Hard but a good day. 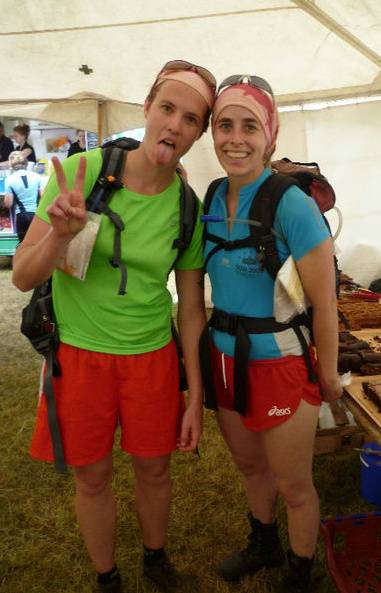 Great campsite in the sun, really nice to be doing a MM where everyone can sit around, chat, cook meals in tin foil and drink beer in the evening – at least until the wind dropped and the midges came out!

Sunday: Ok so starts are meant to be between 8-8:30 and despite being up from half 6, we only managed to start at 8:50, being chased about 10 mins later by Libbs and Vicky!

Seriously hard climb to start with, and I struggled, but a nice flattish section contouring to the next control. We started to overtake people (not so hard when the course is the same as the walking course) and had a moment when we were wondering which knoll it was, and then deciding that maybe it was the one 20 people are sat on. I really don’t like these races so much when every starts so close together, at least by being later to start we got to make our own decisions. A climb after that then a long route choice down to a stream in the valley. We were really pleased with our line in this, we went a lot straighter than others and found a good route down, taking a bearing to a tarn we’d been to the day before. Hit snake path and had great fun wiggling our way down it. Then a nice run down the valley to the next control. Having been in a train for a while Carys tried to take us up an extra control, but the bonus of us both navigating is that I noticed! Then another tough climb at Lingmoor, with some canny navigation at the top. It was a bit weird round here as there were no paths on the map, but we were going up a massive path with steps in, really odd. Then mostly downhill and massive drop into the finish.

Really happy with our navigation today, and after getting over the fact that we were beaten to 1st female pair by 7 minutes were pretty happy to be 11th overall. Will definitely be back next year – hopefully when I’ve done some training.

Report by Jayne Sales. Photos, of Libby and Vicky, from the SLMM website.