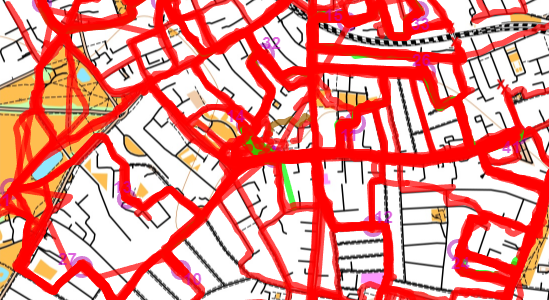 Over 60 people attended the Street-O event hosted at a friendly pub not far from Clapham Common. Thanks to Duncan who planned and organised the event in a great area that included railways, parks, estates, a prison(!) and hills. He managed to catch several people out with the closed bridge over the railway line. Some were also unfortunate with the timing of traffic lights. There was a great variety of routes (as shown in the banner image), which is what we like to see with orienteering! Well done Ryan who won and Lizzie who was an impressive second.

Thanks everyone for coming to the Coach and Horses and hope you enjoyed your run around Brixton, which has become my home in 2022! I hope the roads weren’t too busy and the courses were suitably taxing/stress free. I would like to thank Clare, Steve, Vinh-Phuong, Tess for their help on the night and Fiona and Don with help settling accounts and printing maps respectively. Look forward to hopefully seeing you at Iris’s event around King’s Cross on Tuesday 12th April. Best wishes, Duncan

The remaining Street-O events this year are 12th April at King’s Cross and 10th May at Hammersmith. Hopefully you can make it to one (or both) of these events.

The finale of the Night-O series is on 22nd March on Wimbledon Common. This is one of the most fun races in the year with the excitement of head-to-head racing.