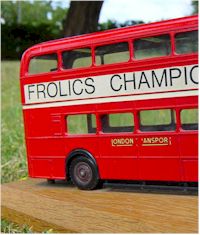 SLOW have won this summer’s F.R.O.L.I.C.S. series of Saturday orienteering races around outer London and so have retained the London Bus trophy. Over 40 members of SLOW took part in at least one of the series of races. The club won the series by a single point from Mole Valley. LOK, the series organisers, were 3rd. More details can be found here.