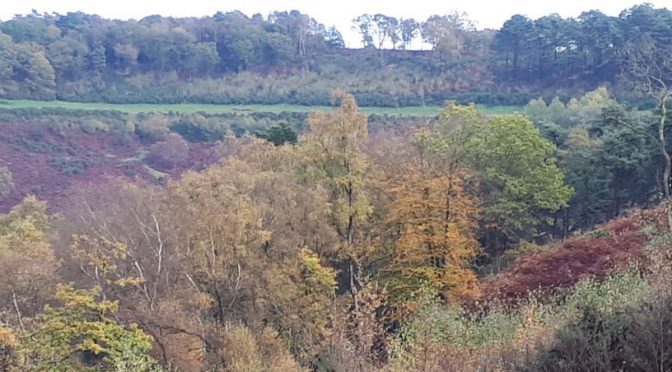 SLOW’s big annual forest race is called the OK Nuts. We have held the race each year for quite a while. This year the race is returning to where it was first held, in 1977.

This year’s race is on Sunday November 25th in conjunction with the Southern Championships. It is the last Major Race of 2018 in the UK Calendar.  (The Major or Level A Races are typically the several format British Championships, the four Area Championships, the races at the JK Festival, and the CompassSport Cup Final.)

We are co-organisers with Southern Navigators (SN) and we are aiming to well justify its Level A status.

The event is accessible by train from London, and although we are still in Surrey (the second highest point in the county is in the middle of the map) much of the area sees few visitors. The natural beauty and remoteness make a big impression on visitors, and in any reasonable weather there will striking views to distract competitors. Usually road development is not good for orienteering but here it has allowed us to join two previously good but separate orienteering areas into one. It is where the last section of the London-Portsmouth road (now known as the A3) had not been “dualled”, and because of the SSSI status the road was put in a tunnel – 60m under our competition area. The main part of the old road was dug out and sandstone taken from the tunnel used to fill it and “return it to nature.” So SN and SLOW could put together the previously separate mapped areas of Hindhead Common (SN) – the venue of, amongst other major races,  the first JK –  and The Devil’s Punch Bowl (SLOW), and offer long courses uninterrupted by traffic.

The most recent past events on Routegadget:

The Devil’s Punch Bowl is a celebrated landscape feature – the largest spring-sapped valley in England. Its rim is a long curving ridge across the new map, with the ground sloping away on both sides, steeply in places. The area is thus a good match for long distance championship races:

For less experienced adults, or those not wanting to tackle the physicality of a championship course, there are short courses and also a testing 4.5km orange course.