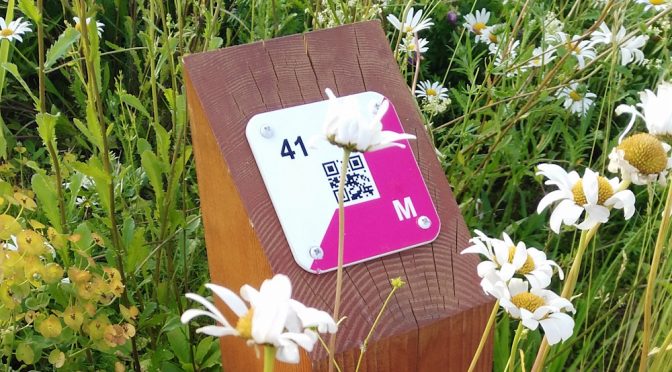 Results for the Hackney Wick Park Race MOBO have now been published, below, along with series rankings (this event is not included) at the bottom.

Thank you to everyone who came along and tried out “MOBO” orienteering with smartphones and QR codes. Following the cancellation of the original park race event that was planned to be in east London this week, there was an opportunity to stage one of SLOW’s occasional free test format events, following in the footsteps of the Wimbledon Common Mobile-O and the Esher Commons MicrO, taking advantage of the new Permanent Orienteering Course which had been installed in the adjacent park, only a few weeks ago, with QR codes allowing for smartphone orienteering.

As we discovered on the night, the success of the format is very much down to people’s individual phones. Some people’s app crashed a few times, others struggled to load in the initial map, and some couldn’t access the options needed to get the map in the first place, due to UI quirks. Short battery lives, old cameras struggling to focus in the gloomy conditions, and screens being difficult to operate in rain also proved to be challenges. But most did get set up, around the courses, and enjoyed the terrain of the new park adjoining Hackney Wick. Out on the course, a gate that was closed late in the race blocked one route to/from a control. Temporary barriers (which have been moving every day) also meant some route choices were less optimum than the map suggested.

Thanks to Tarmo Klaar (creator of MOBO) for setting up a custom event page, Andy and Suki for co-planning and Number 90 Bar for hosting us. The next Park Race is in Beckenham Place Park in south London and is organised by DFOK – details here and Facebook event here.

One item of lost property: Black/turqouise Talon running shoes – they are behind the bar at Number 90. Ollie O’Brien.