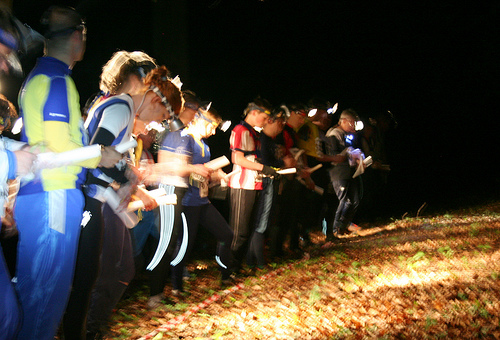 The Harvester Relays are the UK equivalent of the major Nordic/Scandinavian Night & Day Relays. Those events get several hundred teams, while we had to make do with 59 teams this year. But that is still quite a few teams compared to recent years & the event was better for it. Even though there are not as many teams as in Scandinavia, the event still has a unique atmosphere and place in the UK orienteering calendar.

This year’s event was held at Park Wood and Naphill Common in Buckinghamshire, and was held the night after the JOK Chasing Sprint a few miles down the road, which helped to increase participation. Every leg on the relay had a spectator control in the assembly field towards the end of the course (see number 13 on the map extract below), which made for great spectating opportunities – cheering was going on right through the night!

The event has two races, an A class with 7 runners per team which started at 12.30am, and a shorter B class with 5 runners (and generally shorter courses) which started a bit later at 2am. There are also “handicap” trophies awarded within each class, which teams qualify for by having an appropriate combination of age/sex of the runners in the team, as well as a women’s category on the B class. SLOW had teams in the full spread of classes – the A open, A handicap, B open, B handicap, B women and B women’s handicap. Indeed, SLOW had more teams and runners than any other club, with 6 teams and a total of 34 runners! I had some difficult selection decisions to make, with a whole set of objectives. One of which was that everyone should enjoy themselves – I hope we achieved that. Thank you all for taking part & being part of the team spirit over the weekend. 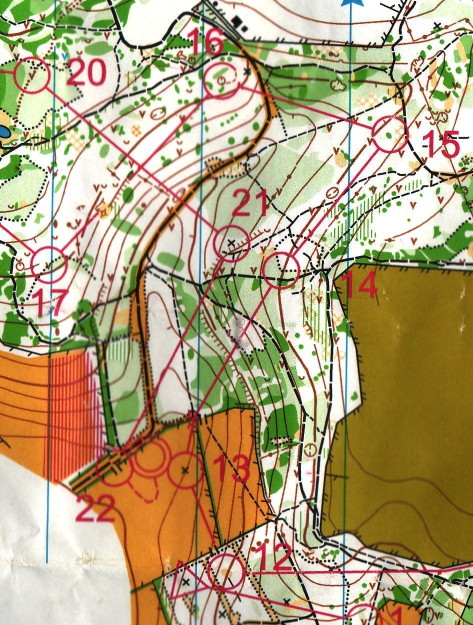 On the A relay, our Open team generally ran very well with some good individual performances. This would have been enough to put us in the top 10 overall, but unfortunately the team was disqualified for mispunching. It does happen, especially at night when you can be relieved just to find any control! (So always check those codes when running in relays!) However it didn’t affect the team’s attitude & everyone continued to run very strongly and enjoy the race with some good runs. The A handicap team was battling in the middle of the field coming an impressive 13th place overall, and the 4th A handicap team. It included a good performance from Simon Evans running through an injury and finishing 2nd place on his leg, and Alan Leakey bravely agreeing to run the long 9km night leg after a reshuffle.

On the B relay we did achieve a top 10 position overall, with the B handicap team of Jim Mallinson, Mike Murray, Chris Fry, Charlie Turner and Peter Haynes finishing in 9th place overall, 42 minutes behind the winners (and 6th B handicap team, 35 minutes behind the winners – the handicaps were very generous this year). Our women’s handicap team was 21st overall and 6th women’s team, about 45 minutes off the leading women’s handicap victors. Our women’s open team suffered a mispunch, but would have come 23rd. Our open team were 29th – this included a top performance from Richard Catmur (another one of our injured who did amazingly well) coming back in the leading pack, and Vince Roper and his super new headlamp (!) hanging on for leg 2.

If you want to practice night orienteering, then there will be a new series of low-key events in the south-east over the winter – check for details of events later in the year.

Thanks to Thames Valley OC for hosting the event. The full results of the event can be found here.

SLOW’s next venture into night & day relays will be at the Jukola in Tampere, Finland, on 14/15 June, where two teams of SLOW runners are taking part.

(Thanks also to Pete who had the tough job of organising our 34 runners into 6 different competitive teams, as well as handling the logistics of making sure everyone had a working headlamp! Everyone seemed to enjoy the event and it was great to see so many SLOW runners competing – we hope you’ll all be back again for the Harvester next year! – Paul)