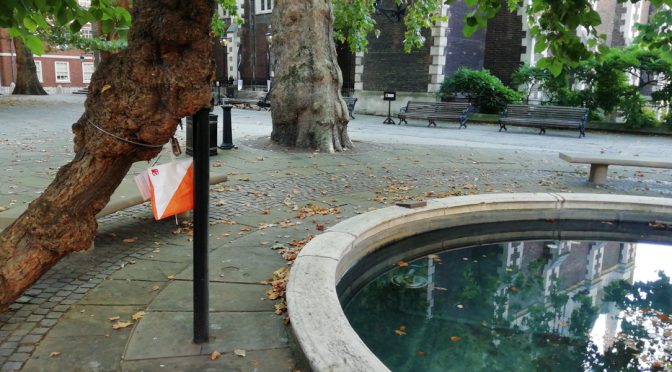 Posted on 21 September 2019 By Steve Clelland

My plan for this event was to provide a mix of running through some iconic/historic locations coupled with a degree of technical challenge en route and especially to test interpretive skills and route choice towards the end of the courses in the Barbican. To start, I hope I offered an early but simple introduction to the Barbican, before unleashing you in the City and then returning you to the Barbican for some complex multi-level orienteering.

Despite regularly visiting the area, almost daily in the final stages, and updating the map several times prior to the Start, the road closure which affected travel to and from #255 was significantly disruptive and did not appear to have commenced until after final course checks had been completed. Voiding the leg was the obvious outcome to be fair to all.

Orienteering is about precision and there were a few instances where my course design and control descriptions led to a 50/50 chance that your decision was correct, and which I hope to discuss below.

Some of you will have visited an alternative location for #234, which had been correctly placed out but moved by me to a nearby stair foot. This had been my original planned location but which was adjusted following description discussions with the Controller. On learning that my re-siting was incorrect, I returned and returned it to its proper location.

Some comment was received about whether #205 was a guess as to whether it sat in the lower corridor or above. The location of the circle centre placed it outside the lower corridor and because the map showed that the W-E and N-S corridors were runnable, I think that the control could only be considered to be above.

#243 however turned out to be coin toss as well as a mapping issue, given the level of detail shown in the circle. I started my plans in earnest with the junior courses which were placed in simple and obvious locations to minimise route choice decisions and, for tired runners returning to the Barbican, I used some of these to challenge whether they were above or below. As there was no logic which could point to the control being above, some runners will have gone to the lower location which was a valid location.

A final lack of precision led to the control description on the W Elite course covering a potentially valid route choice albeit via an unknown open or closed gate into the Temple. Having covered the gateway, runners selecting that route were taking a chance that the gate would be open and unfortunately some found this not to be the case.

Thank you to everyone who volunteered on the day, especially those who relieved my burden putting out and bringing back controls and to Alan Rosen, Controller, for his counsel, challenge and persistence in encouraging me to improve my plans.

I hope some of you had the opportunity to look up and enjoy your surroundings and the late Summer sunshine.

Well, we got there in the end. Many of you will be aware of the challenges that we had hosting this year’s event, but hopefully they were forgotten on the day as our replacement venue shone in the sun. We were fortunate once again in the weather with near perfect conditions and only slightly hindered by the unknown booking of the grass quadrangle for another event. But on the day gave us access to the large lecture theatre to provide more space – and extra toilets.

We hope you enjoyed the courses

The Planner, Andy Johnson, has referred to the road closure that affected some courses on the day. It is an illustration that that there are always some things out of the event teams’ control. In this case it was an emergency replacement to a damaged large glass skylight set in the pavement; which meant that the road was closed after the first start and then reopened before the last start! And as the road is part of St Bart’s hospital grounds the road closure was not listed on the City of London website and we obviously not aware of it in advance. Ironically the attempt at replacement failed and the workmen will have to come back on another day! What disappointed me more than the closure itself was the attitude of a significant number of competitors after they finished, berating the Download team about a problem that we were already aware of and responding to. A much wiser orienteer than me once told me of his 10-Minute Rule… wait 10 minutes after you finish to calm down – and only then raise your concern in a reasonable manner. An approach that far too many orienteers would do well to adopt.

And, as is far too common, we had reports of a few people crossing out of bounds or sliding through ‘closed’ gates behind a member of the pubic. Whilst we don’t have enough evidence to be certain enough to disqualify particular individuals it can be pretty obvious to everyone on occasion from the amazing splits in results. Recognise that all you do is fool yourself – and lose the respect of your fellow competitors.

And unfortunately, I spent today responding to complaints about our usage of the Barbican. In particular, the number of inconsiderate competitors that rang the bell of the apartment block by the start, apparently expecting to use the toilets of private apartments.  We accept we did not have adequate toilet provision early on at assembly and the public toilets were not clearly signed, however late starters are never penalised. We will do better on this in future years.

The planning for the 2019 London City Race went from first draft course to start line in 21 days so apologies if that showed in some respects but I hope everyone enjoyed running through both the historic and modern parts of the City.  Understanding the Barbican is always a challenge and congratulations to the juniors in particular for coping so well with the unusual terrain.
Well done to Andy for setting some challenging courses and all the logistics on the day, ably assisted by SLOW members.  Thank you both to Don McKerrow for being able to update the map at very short notice and to Rae and Nigel at BML for their help with map printing.
Unfortunately a number of courses were affected by the unexpected blocking of a road for part of the morning.  The legs which were impacted by this have been removed from the results:
Course 1  Leg 24-25. Course 2  Leg 17-18. Course 3  Leg 25-26. Course 4  Leg 13-14. Course 5  Leg 23-24. Course 7  Legs 2-3 and 3-4. Course 11 Legs 7-8 and 8-9

We hope that this didn’t affect your runs too badly.
We are also aware that the Women’s Elite map had part of the control descriptions obscuring a possible route choice – our apologies for this.

Plans are already underway for next year, so make a note in your diaries: