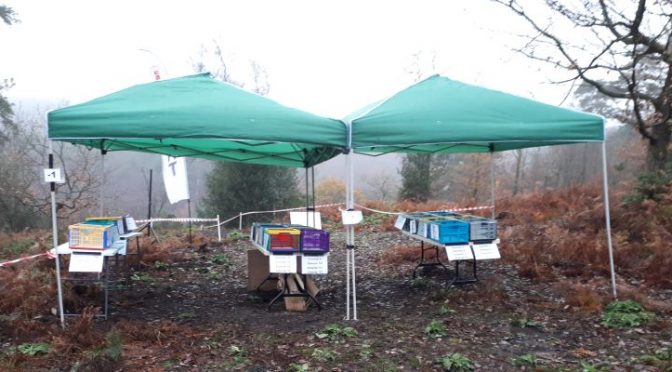 (picture: maps await the runners at the start)

The 2018 OK Nuts Trophy Races took place on November 25th, in conjunction with the Southern Championships, at Hindhead Common & The Devil’s Punch Bowl.

The event was a Southern Navigators / South London Orienteers collaboration.

Courses were tough, at the upper end of  the length range and with more than usual climb, testing both physical endurance and navigation and route choice in the terrain. (Pictures are from this year’s British Championships races at Balmoral, credit: On The Red Line.)

The junior trophy was awarded to Lyra Medlock of Wessex Orienteers.

On the longest course for each age group the first runner from the three southern associations becomes Southern Champion 2018. In the open classes the champions are William White and Lucy Butt, both of the Salisbury Club SARUM. The  Event Routegadget, includes maps and courses, with the uploaded routes of over 100 runners.