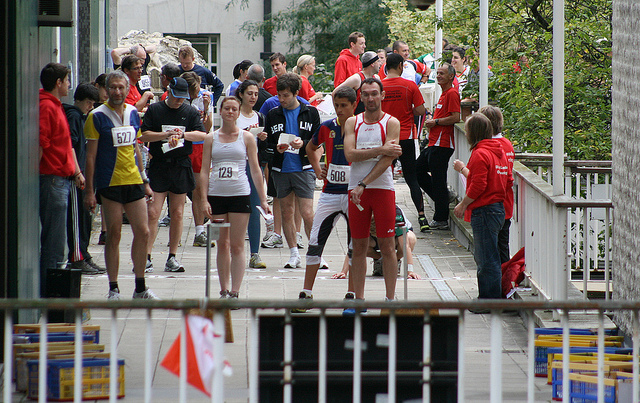 Here are the race comments from the Race Director, Planner, Controllers and Club Chairman, for the fourth City of London Race that took place on 10 September. You can see the results, photos and videos, and over 220 competitor routes on Routegadget, from the race on the event’s website. And don’t miss SLOW’s next big event, the OK Nuts Trophy, which is on 27 November. 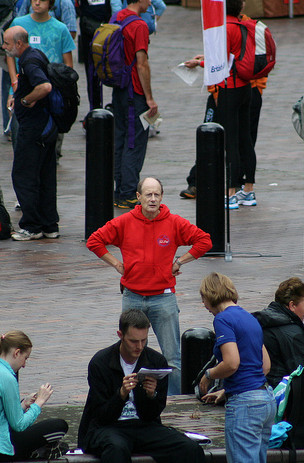 Firstly to get the negatives out of the way. We received one significant complaint about several competitors running into a couple of Barbican residents during the event. Whilst I am sure that we do not yet know all of the story we did make a particular point at the Start of asking people to be careful about this. As a result we are now having to work hard to minimise the impact of this complaint on our future access to the Barbican.
We also had a couple of people did not download, which resulted in the usual waste of time whilst we checked and double checked finishers and then had to make judgement calls on whether a search was required. To repeat what has had to be said too often before – you must download, no matter how little of your course you completed.

And now on to some big Thank You’s on your behalf: 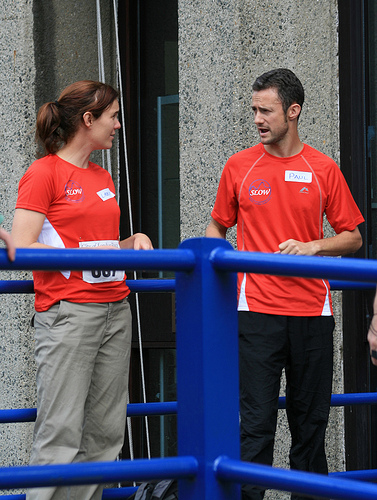 Somehow passing 1000 entries for the first time seems like a rite of passage for the event and we can now lay claim to be a significant event in the life of the City of London as well as the orienteering calendar. Of course growth also bring its own challenges, such as the need for bigger and better facilities and additional control sites to spread the flow of competitors – but they are a worthwhile price to pay. But perhaps more significant is that the event is no longer just what we organise but also what you contribute. Not just thank you emails but through blogs, pictures and videos on Facebook, discussion forums, magazine articles and offers of help with contacts and so on. Thank you and sure to put the weekend of 22/23 September 2012 in your diary and follow the updates on the event website. 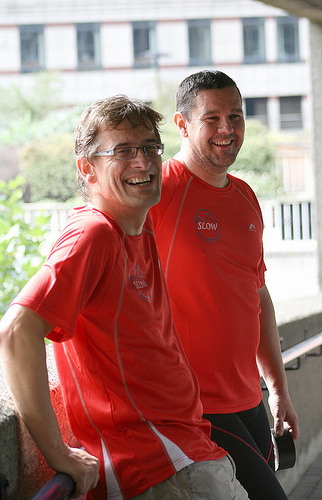 I hope you all enjoyed your courses. My intention was to try and immerse competitors into the Barbican very early on, where possible, but also to give you another helping of the Barbican near the end when you were feeling tired. Distances were always tricky from a planning perspective as the actual distance is so much different from the straight line – the shortest distance on the Men’s Long came in at 12.8km and the Women’s Long at 10.6km. The other challenge was maintaining as wide a range of route choices as possible – my general aim being a minimum of two on most legs but ideally three or four on a lot of legs while at the same time finding sufficiently robust structures onto which to lock down the controls – this turned into quite a challenge with a lot of days spent walking the City and Barbican streets and 9 versions of the courses before I got happy with the quality of the courses!

There are two areas I would like to cover which have caused some discussion after the event. The first is the central ramp area in the Barbican which was shown in the final details as an extract. Some competitors found the stairs coming from the bottom upwards onto the ramp confusing due to their being a stairs under the high walkway which was offset mapped and another smaller stairs into the car park which was going further underground and into an out of bounds area. A small percentage of competitors on courses 5,6 and 9 suffered lost time in this area depending on the way in which they came in under the high walk as the main stairs was only visible from two of the three entrance points. This is the first time that Ollie has mapped this ramp area and we are looking at making further tweaks to the map to try and get it as clear as possible for the future – however, as you can probably appreciate we are going to the extremes of mapping to try and depict three levels on a conventional map! 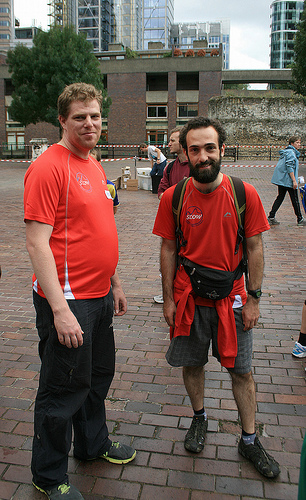 The second item, which is generating discussion is the open gate shown as uncrossable on the map between leg 2 and 3 on Course 9. This gate has historically always been locked on my many Saturday and Sunday visits to the City streets – this is the first time I have ever found it open at the weekend. Consequently, myself and Ollie have consistently taken the view if there is a doubt over a gate being locked we have shown it as closed. Indeed, only the Sunday prior to the event when doing a final control check of all sites, I found one control inaccessible from both ends of an alley due to the gates being locked (in this case the first time ever). As a result I had to make a rapid change of control sites on the Monday before the event which affected 8 courses to avoid this happening in the event.

This rapid change in the environment is one of the great challenges of urban planning – what is open or closed varies, road works come and go in the space of a few days, feature get removed rapidly – there were 8 new sets of road works in the three days before the event – fortunately none of then affected the courses. Also a few of them had gone and opened up route options too!

I would also like to thank Ronan and Julie for their invaluable advice and suggestions through the planning process – this definitely made for an optimum experience for the competitors. We look forward to seeing you back again next year where I am sure we will find some more challenges.

It was a pleasure and a privilege to have controlled this year’s City of London Orienteering Race – a fantastic setting for an urban race, as the ever increasing entry list (over 1,100 entries from 28 countries in only its 4th year) shows. The difficulties behind planning a challenging, but fair urban race in such a dynamic and ever-changing city while providing suitable Arena facilities capable of handling that number of competitors are significant. However, from the very positive feedback received, SLOW delivered on both of these key areas.

Gordon’s approach to planning was organised and thorough and he was keen for his courses to deliver a good combination of physical and technical challenge – which we (and you, by your comments) think they did. The choice of the Barbican for Start and Finish was always going to be key to this with the challenge being to ensure that route choice options were represented fairly on the map. While the use of a multi-level area such as the Barbican can never be 100% fairly depicted on an ISSOM map, Oliver’s highly-tuned mapping skills and his infinite patience for constantly updating and tweaking the map up to the last minute kept any possible lack of fairness to a minimum and resulted in a superb map. Despite this, (as Gordon mentions in his comments) amidst the huge amount of detail and potential route choices within the Barbican, we all missed the small additional stairs in the ramp area which caused some confusion to a small number of competitors – our apologies to those who were affected.

One minor gripe: a small number of competitors chose to ignore signs clearly showing a couple of passageways within the Barbican to be Out of Bounds to orienteers (and marked in Olive Green “forbidden access” on their maps). This led them to enter a building through closed doors in order to change levels. The event had no access to this private area and it could have led to restrictions on use of the Barbican in future years. This seems to be a common occurrence at urban/sprint races and all competitors need to recognise that they have a clear responsibility not to knowingly enter Out of Bounds areas.

The ever-changing London urban landscape caused particular problems for the planner and mapper with the courses still having to be changed 5 days before the race with 1 control site being lost due to a previously always-open gate being found locked and another due to receiving last minute notice of a festival in a small park which meant Gordon had to move the control outside the park to ensure the approach to it would be unimpeded. Additionally, roadworks and building sites were shown with purple overprint based on a final run around the area the weekend before the event, but some had still changed by the day of the event – thankfully not with any material effect on the courses. 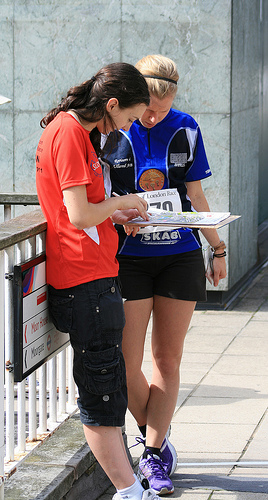 Safety is always high on the agenda at urban races: the Barbican was ideal for the Children’s (M/W12-) course with only the pedestrian areas used. The strategic placing of smiley/frownie faces between controls to help the children navigate safely through the trickier elements of the course and the experimental use of a time penalty rather than disqualification for missed controls both appear to have been well received initiatives. The Junior (M/W16-) course was more of a challenge and, while Gordon planned it with safety foremost in his mind ensuring that any road crossings were either by pedestrian bridge or in low traffic flow areas and we were happy that the course was suitable, it was definitely at the limits of the BOF safety guidelines. This will continue to be problematic for future City of London planners and, indeed, other urban races that seek to provide courses for under-16s.

SLOW rolled out a small army of volunteers on the day and under Alan’s experienced oversight as Race Director, the organisation was smooth and efficient with a good Arena atmosphere. The club can be very proud of what they have achieved in the short time since the 1st City of London Orienteering Race in 2008 with it now firmly established on the international urban race calendar and 2nd only to Venice. We very much look forward to being competitors in next year’s race…

SLOW have been delighted with the growth in interest in the City of London Race. With over 1100 entries this year it is certainly the biggest event SLOW have put on for some years, the biggest urban race ever in the UK, and probably the fourth biggest Orienteering event in the UK this year after the JK, the British, and the Scottish 6 days. We are particularly delighted with the appeal it seems to have to two particular groups; namely foreigners and newcomers to our sport. We are looking forward to an even bigger field next year. Please put the date for next year’s race in your diary now – 22 September 2012. 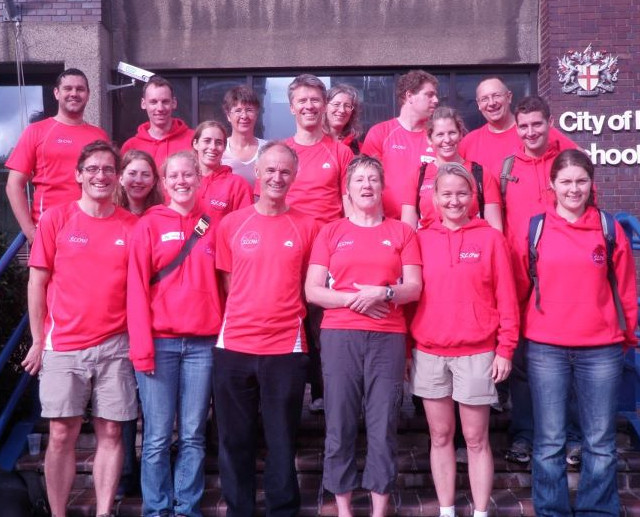